This study was designed to determine the frequency of Y chromosome AZF (Azoospermia Factor ) subregions, microdeletions in patients with idiopathic nonobstructive azoospermia and severe oligozoospermia. Subjects included 40 men who had been referred to infertility clinics for assisted reproduction, 37 were azoospermic and 3 had severe oligospermia. Medical history and physical exam revealed no evidence of infection, obstruction of seminal tract, endocrine failure or chromosomal anomalies. Hormonal study was performed for all patients. Twenty six men had biopsies of the testes including 11 patients with hypospermatogenesis, 9 patients with maturation arrest, 4 patients with sertoli cell only syndrome and 2 patients with tubular sclerosis. In 14 men who did not have a testicular biopsy multiple, epididymal and testicular sperm aspirations under anesthesia failed and testicular sperm extraction was subsequently performed for ICSI. DNA was isolated from blood samples. Polymerase chain reaction (PCR) amplification of 11 loci spanning the AZFa, AZFb and AZFc subregions of the Y chromosome using sY81, sY83, sY127, sY130, sY131, sY147, sY149, sY157, sY158, sY254 and sY276 was performed. Microdeletions of the Y chromosome were found in two of the patients (5%), who had azoospermia. Deletions were restricted to DAZ (deleted in azoospermia ) locus in AZFc subregion. One of the patients had a history of cryptorchidism and the second had undergone a left side varicocelectomy. Testicular pathology showed sertoli cell only syndrome in both of them. Our experience adds to the current logic that men with azoospermia or severe oligospermia should be evaluated for Yq11 microdeletions before deciding to operate varicoceles or else scheduling them for assisted reproductive techniques.
How to Cite
1.
F. Akbari Asbagh, A. Sina, H. Najmabadi, M. T. Akbari, A. Tabarroki Gh. Pourm. PREVALENCE OF Y CHROMOSOME MICRODELETIONS IN IRANIAN INFERTILE MEN. Acta Med Iran. 1;41(3):164-170.
Download Citation 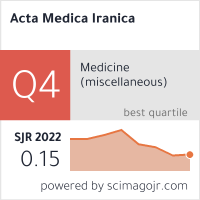